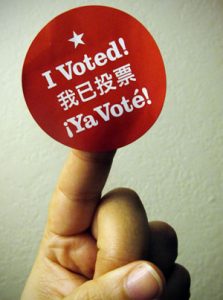 There’s an old saying, “all politics is local.” But in this election, it’s “all policies are local.” Over the weekend, I received my official sample ballot for the November 8th Presidential Elections.   Yes, it was a little daunting to thumb through eight to ten pages of contests.  And, I have to confess that like millions of voters, the partisanship and politics surrounding the election has been a little off-putting. But my Sample Ballot saved this election for me!

As I turned each page, going from federal to state to local contests, I realized something. Much like the dynamics of this election season, the political choices come at the front of the ballot while the substantive policy choices are pushed to the end of the ballot. For those of us wondering what difference our vote might make in a national election, how about making a difference on the issue of homelessness? The issue of homelessness affects tens of thousands of Angelenos everyday. Voters in the City of Los Angeles have the opportunity to solve a real problem with their vote for Proposition HHH.

The biggest challenge for the proposition, however, is not voter support. It’s the seven pages and the dozen contests that come before it!  Every election, millions of voters walk into the voting booth and vote the top of the ticket, thinking the top of the ballot is what matters the most.  But in my experience as an elections official, as many as 30% of voters will not vote their ballot all the way through. This election, voters in Los Angeles would be leaving $2 billion dollars on the table if they don’t turn every page on their ballot.

In an election that has been marred by hyper-partisanship and rhetoric, the bottom of the ballot outshines the top of the ticket.  If you want to “Make your Mark” this election, be sure to “TURN THE PAGE”.

Efrain Escobedo is the vice president of civic engagement and public policy at CCF. Prior to joining the foundation, he served as the manager of governmental and legislative affairs for the Registrar of Voters in Los Angeles County. Photo by Anita Hart.