From Where I Stand: Homelessness in Los Angeles 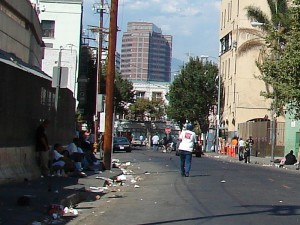 When I look out of my 5th floor window at night, I can see folks sleeping in their cars and on the street. In Los Angeles, there are more than 58,000 homeless people and many find their way here, to skid row, night after night. More than 5,000 sleep on sidewalks, under bridges, overpasses and in parks, at the mercy of the elements, every night. 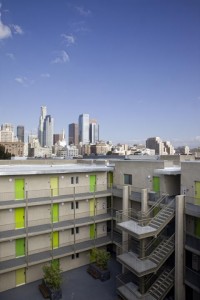 Nobody just ‘becomes’ homeless; drug addiction and mental illness play a huge part in the downward spiral that leads to the street. For me, severe depression coupled with a disability that makes working very challenging (I am legally blind) landed me at the LAMP shelter several years ago. I was homeless, unwell, unsafe and vulnerable. At LAMP, I was connected to the support services that would secure disability status and benefits and  mental health services through the County Department of Mental Health. I was also connection to the Skid Row Housing Trust.Skid Row Housing Trusts (SRHT) owns 1,700 units in 22 buildings in Los Angeles and provides permanent supportive housing: long-term housing together with the support services residents so desperately need, all in one place. SRHT believes in a ‘Housing First’ philosophy; give a homeless person a secure and stable home and they can rebuild their life from that base. The traditional model of temporary housing has proven to be ineffective. The homeless refer to it as the hamster wheel: get 90 days of housing, clean up and then find yourself back on the street in no time. Just think, if it is challenging for a healthy and educated individual to get a job that pays a living wage, imagine a homeless person. To think 90 days is enough time to rebuild a life is setting a homeless person up for failure. 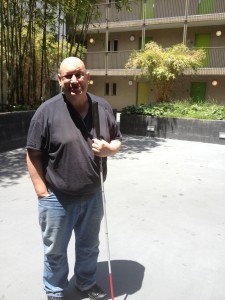 Steve Hatter in the courtyard of The Abbey

Doing nothing about homelessness costs taxpayers upwards of $60-90 a day for emergency shelter and services whereas stable housing for the homeless costs an average of $30 a day. Here at The Abbey, where I live, we have resident support that includes sober support, behavioral services, benefits coordinators as well as help with goal setting, becoming accustomed to independent living and peer counseling.

At The Abbey we have classes such as Yoga and at our soon-to-be completed facilities, STAR Apartments, there will be a running track. People often ask why homeless people need a running track or a yoga class and I tell them it is so that we can become human again. A chronic homeless woman lived in her tent in the middle of her home for months, out of fear that her key would be taken away. She gradually eased into the idea that she was home. She had been so dehumanized by homelessness that she needed to learn what safety felt like.

When I look out of my front door, I face the courtyard. We have a rooftop garden here. I see my neighbors, my community and I feel safe. I have become a SRHT Ambassador and I speak to various organizations and groups about my experience and about SRHT. My life is healthy and whole, thanks to my stable home.