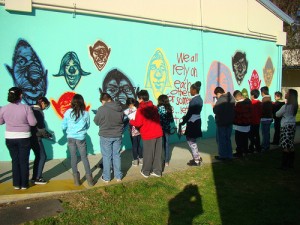 Harry Wirtz Elementary became a canvas for a group of renowned contemporary artists who created four murals on the campus’ walls earlier this year.

Wirtz Elementary is a Title I school with a high percentage of students on free/reduced lunch, located in Paramount Unified School District. It’s been an Arts for All school since 2006 and has a demonstrated commitment to arts education. However, like many others in Los Angeles County, its experienced major reductions in funding in the past few years. It took creativity, collaboration and a dedicated fifth-grade teacher to bring the mural project to the school. 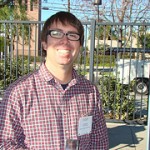 decided he wanted his students to have more art opportunities. According to Wirtz principal Kelly Williams, Caruso is an inspirational teacher who began his innovative program by contacting five artists whose work he admired. The artists were supportive of Caruso’s idea and agreed to participate in the mural project.

As one of the artists is from Texas and one lives in Japan, funding the ambitious program was an immediate concern for Caruso and Williams. Williams considered approaching a neighborhood business for support and wondered where she would be able to find money to help fund the project.

Two of the artists have done work for the Vans Corporation as designers and approached the company to sponsor the mural project. Vans not only agreed to pay for materials and supplies, but also paid for the airfare for out-of-town artists to come to Los Angeles.

Now that the project was fully funded, Williams and Caruso put together a presentation for Paramount’s Superintendent, Dr. David Verdugo, a major champion of arts education in PUSD. Dr. Verdugo thought it was a great opportunity for the Wirtz community.

Parents and administrators also had a chance to preview the murals’ content. That was necessary, says Williams, because these aren’t the typical murals you see in many public schools. “You’re not going to see a standard mural. It’s not a lion or a wizard or a star; it’s going to be art. We’re not used to seeing this kind of work on school walls. Our kids can look at it and have a conversation.” 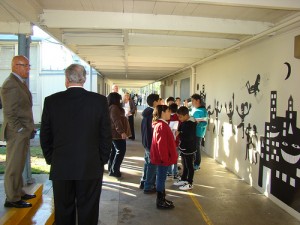 In fact, several of the murals are inspired by fifth-grade curriculum. Mr. Caruso provides the artists with an overview of what his students are studying and encourages his students to connect visual arts with science, math and language arts.

One of the murals portrays Anne Frank, whose diary is standard curriculum for Wirtz students. Another artist was inspired by a story from the students’ language arts unit on heritage to create a buffalo image that incorporates themes of conservation and coexistence. Williams says, “These murals are intended to inspire the students to start asking questions and want to know more about the subjects. Mr. Caruso has gone above and beyond the call to bring opportunities to these students. “

Williams also pointed to changing attitudes toward student evaluations and the pressure to move away from simple numbers-based assessment. “In future, students will be assessed in a different way,” Williams says. “They’ll be asked to respond and give reasons for their answers, not simply fill in a multiple-choice bubble. Increasingly, our students must be able to examine, evaluate and explain things. Art lends itself to teaching those skills.”

This blog was written by Camille Schenkkan for Arts for LA and was originally posted on the Arts for LA Blog.