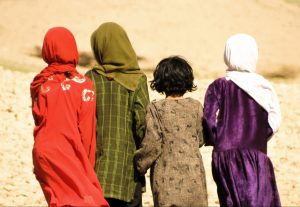 As of August 2021, Afghanistan is on the brink of a humanitarian catastrophe precipitated by the collapse of the Afghan government, the Taliban’s takeover, political, environmental, economic crises, and in the wake of the U.S. withdrawal of troops from the country.(1) Urgent and decisive action is needed to prioritize the protection of Afghan asylees and refugees forced to flee for their lives and relocate in Los Angeles.

The World Health Organization is reporting that 50 percent of the population in Afghanistan is in need of humanitarian assistance. This includes at least 10 million children. As many as 3 million Afghans have been internally displaced since 2020. Since the Taliban takeover, tens of thousands have attempted to flee the country by land or air.(2) In 2021, more than 270,000 Afghans have been displaced and about 30,000 Afghans, including children, have fled each week since the end of July 2021.(3)

Outside of Afghanistan, California is home to the largest number of Afghans in the U.S. with large numbers residing in the Sacramento, San Diego and Los Angeles areas, including the San Fernando Valley and Orange County. Los Angeles has approximately 107+ arrivals and anticipates it will resettle a minimum of 700 Afghan refugees between now and March 2022.

On August 31, Los Angeles County Board of Supervisors Hilda Solis and Janice Hahn introduced a joint motion which directed the CEO, the County’s Office of Immigrant Affairs (OIA), and all relevant County departments and government agencies to conduct an assessment and linkage of eligible services (cash aid, medical and mental health care, workforce development and immigration legal assistance) to Afghan Special Immigrant Visa (SIV) holders already in the County and those who may imminently arrive thereafter.

In addition, Solis and Hahn’s motion directed the County CEO to create the Afghan Refugee Task Force headed by the Office of Immigrant Affairs (OIA) in collaboration with the Office of Emergency Management (OEM) to provide and coordinate County resources to serve newly arrived Afghan nationals resettling in Los Angeles County and to communicate to Federal government the County’s readiness to support the resettling of Afghan nationals.(4)

Rosie Arroyo, CCF’s Senior Program Officer for Immigration, was invited to serve on the task force. Over the last decade, CCF has played a significant role in coordinated, multi-sector responses to advocate for the needs of immigrant communities in Los Angeles.

Once settled in Los Angeles County, Afghan refugees and asylees will have the challenge of rebuilding their lives in the U.S. While there is little Los Angeles County data on this population available, local non-profit partners indicate that the needs of those settling in Los Angeles County will include but not be limited to: legal and immigration support, housing and cash assistance, job training, language resources and training, mental health resources, and protection of civil rights/liberties due to islamophobia and anti-immigrant sentiment.

In Los Angeles, top urgent and emerging needs identified via the County Afghan Refugee Task Force and community organizations include:

As the crisis in Afghanistan escalates, Afghan-led community partners mobilized to create the “American Network of Services for Afghan Refugees of Southern California (ANSAR of SoCal). The objective of the ANSAR of SoCal is to connect new Afghan arrivals with the necessary legal, education and outreach, mental health, housing, and social services needed to reasonably adjust to life in the Greater Los Angeles area. Additionally, the organizations that make up the ANSAR of SoCal network will serve as social connectors for newly arrived Afghan individuals and families. The ANSAR of SoCal currently includes the following organizations:

Afghan American Muslim Outreach (AAMO): AAMO serves the Afghan community through social activism, fostering an Afghan-American Muslim identity, and empowering future generations with the tools to enhance their Islamic knowledge and pursue higher education to better serve their communities. AAMO will chair the education and outreach subcommittee of the ANSAR of SoCal.

Afghan American Cultural Center (AACC): AACC provides a forum for all Afghans residing in Southern California to promote unity, harmony and community cohesion amongst themselves, to preserve their Afghan cultural values and traditions and to transfer it to the future generations of Afghan-Americans. AACC will chair the social connection and integration subcommittee of the ANSAR of SoCal.

Sahaba Initiative: The Sahaba Initiative’s philosophy is to empower and sustain families with programs that address mental health issues, poverty and hunger while also focusing on creating a narrative and culture of service.

Uplift Charity: Uplift Charity seeks to assist those in need by empowering them with the tools, support and resources to improve their socioeconomic status. They assist those who have recently migrated who have little or no support network.