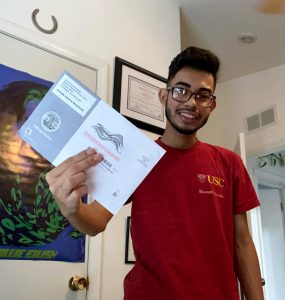 We are officially one year away from the next “biggest election of our life.” Our communities hear this phrase every election cycle—and every election, it’s true.

Because of California’s top-two system and lower voter turnout in non-Presidential elections, a June primary is still “the biggest election of our life.” In the state’s election system, the top two vote-getters, regardless of their partisan affiliations, advance to the general election. As we head into 2022, our electoral and philanthropic partners are ready to go. The 2020 election pushed community-based organizations and advocates to take strategy, creativity, urgency, and coalition building to another level. As we reflect on the successes of the past elections, CCF is committed to ensuring that all Angelenos are informed and empowered voters.

One of the community organizations CCF partnered with for voter engagement was the Coalition for Humane Immigrant Rights (CHIRLA).

Historically, voter turn-out among vulnerable communities has caused much loss at the ballot box. The passage of Prop 187 in 1994 stirred up voting engagement with Californians. Every year since 1994, more community-based organizations ramp up their electoral projects and campaigns. In 2004, CHIRLA launched its first electoral campaign, where they contacted 1,5000 voters in the San Fernando Valley.  In 2020, CHIRLA’s Immigrant Political Power Project was able to reach nearly a quarter-million voters across the state.

For CHIRLA members, the 2020 election was an opportunity to use one of the loudest megaphones at their disposal: their VOTE.  The organization engaged with community members early and using their own experience, voice, and community’s leadership to get Latino voters to pay attention and want to be part of the solution for a new government, new legislative options on immigration reform, and less attacks on community members because they are immigrant or brown. 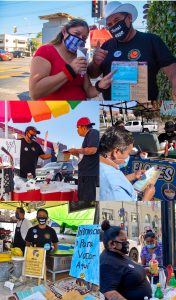 CHIRLA approached civic engagement the same way they approach organizing—having real people take hold of their own experience to move our electoral program forwards.   This mean that women, moms, workers, immigrants, young people, undocumented folks, sons and daughters of immigrants, are at the helm of the outreach program, call center operations, and leadership.

It meant collaborating in unison with various coalitions while preserving the integrity of each organization’s missions and goals.  It meant real conversations with CHIRLA members in various parts of the state via zoom and in person.  And it meant approaching voters with respect and high expectations.   They also relied on influencers, such as street food vendors and social media and entertainment figures, to reach more people.  And it meant celebrating voting as part of an emerging cultural tradition.  Even including this in a slogan about celebrating voting as cultural and a spirit of renewal.

Over the last year and a half, CCF has invested and prioritized the 2020 Census, Civic Engagement, and COVID19 vaccine education and outreach. This momentum of civic engagement investment has had an important influence on the electoral infrastructures for grassroots organizations.  Voter outreach is now included in year-round advocacy and community education.

This momentum will continue to build into the primaries in June 2022. Angelenos will have the opportunity to vote for local, state, and federal positions. The challenge will be to create the opportunity for youth, immigrants, new Americans, people of color, and families to get involved and to be part of their own destiny. We will continue to mobilize our communities, because until all Angelenos have a fair and equitable life — this is the biggest election of our lives.