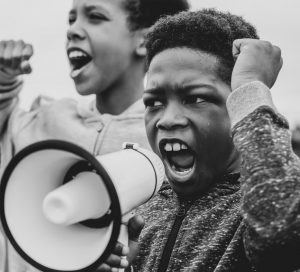 As we continue to bear witness to the painfully long list of Black lives lost by the hands of those sworn to protect us, words fail us. How does one adequately describe the pain and despair of communities whose only demands are equality and justice. Acts of disproportionate violence against Black lives rattle us on a seemingly daily basis. And even with the extraordinary show of solidarity for Black Lives Matter in Los Angeles, they shake us to our core when these murders are in our own backyards.

There are harsh realities to life as a Black person in America, so much so that it feels somehow calculated when we look at the numbers of our youth that are pushed into the school-to-prison pipeline. Both initial contact and continued involvement with the justice system are associated with negative outcomes such as increased likelihood of being a high school dropout, trauma, substance abuse and other outcomes that negatively impact a young person’s lifetime health and success. Formerly incarcerated persons earn lower wages because they face occupational restrictions, encounter discrimination in the hiring process have weaker social networks and less human capital due to their incarceration. The formerly incarcerated also have a mortality rate 3.5 times higher than that of people who have never been incarcerated. Their shortened life spans collectively add an economic toll of almost $63 billion to the United States.[1]

Black boys and men are physically and systemically being murdered by an institution that was originally created as a slave patrol. When slavery became outlawed, that institution’s purpose evolved into enforcing segregation, ensuring voter suppression and lynching those who were perceived as challenging white supremacy. Simply put, our carceral system was developed, in part, to protect society from Black people.

#JUSTICE4DIJONKIZZEE
It was Monday, August 31st that Sean – a BLOOM (Building a Lifetime of Options and Opportunities for Men) alumnus – received the news no brother wants to hear. His older brother Dijon Kizzee was shot nearly 15 times by the police after being stopped on his bicycle, allegedly for a traffic violation.

I met Sean in 2017 through my work with BLOOM and the Social Justice Learning Institute. At first glance he appeared to be quieter than some of the other young men, but Sean has developed the skills to become a leader within his community. He has been a fierce organizer for advocacy campaigns over the last four years to push for criminal justice reform preventing more Black and Brown lives from being lost. “BLOOM turned me into a role model for my community.” The loss of his brother demonstrates that much more remains to be done.

Sean’s brother was only 29 years. Dijon was a loving, family-oriented son who took great care of his mother until her death in 2011. He had a full life ahead of him. He had goals. He had dreams. Like so many other Black and Brown lives lost, his family and his city lost another potential innovator, entrepreneur, or civic leader to take on our challenges and contribute to our shared prosperity.

COMMUNITY EMPOWERMENT
Systemic racism affects us all. It tilts the scales against its victims. It produces inequitable outcomes of every type; however, we can stop and refuse to go along with the systems that are failing us. Society can make new choices to believe and invest in the capacity of people and communities, and to align strategies, while matching community resources to the size of the issue and solutions needed.

Through programs such as BLOOM and Ready to Rise, we can make those investments in proven models that build leaders. Our funding and resources can be invested in programs and practices that eliminate the criminalization of entire communities, especially boys and men of color. By combining academic support and scholarships with services like mentorship, college readiness, job training and social-emotional support, BLOOM puts young men on positive paths so they can succeed in college, career and in life.

We must advocate and invest in new approaches that move away from policing and criminalization of Black and Brown people. Systems can only change when communities are resourced and can advocate for what they know they need. The safest communities have the most resources.

UNITY AND SOLIDARITY CAN YIELD SYSTEMIC CHANGE
We are standing at an important crossroads in history that will define who we become as a nation. Our actions today will determine the livelihood of generations to come, but the first step must be rooted in a solidarity that binds our society and helps it evolve. We must repair and rewrite the social contracts that have been violated and broken for centuries. It is time to honor our shared humanity, to heal and find justice to address our long history of violence, disinvestment and punitive racist policies and laws.

We must acknowledge the Black boys and Black men whose lives have been irrevocably impacted by the failures of our societal racism. Likewise, we recognize the advocates, organizers and policymakers for their ongoing reexamination of our structures. Such reflections illuminate the opportunity gaps that exists for Black and Brown male youth.

CCF stands in solidarity with Sean and his family in their call for justice for Dijon Kizzee.