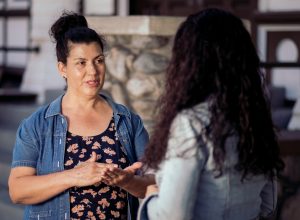 With a September 30 deadline looming, a surge in grassroots outreach is more critical than ever to encourage census participation among LA County’s populations most vulnerable to an undercount.

LA County was long designated at the “hardest-to-count” region in the nation, which has only been made more challenging with the onset of the COVID-19 pandemic and continued changes from the U.S. Census Bureau’s in-person enumeration efforts and deadlines. These unprecedented challenges are resulting in lower response rates across the nation. Among the hard-to-count census tracts in the region, Northeast/East LA, Central LA and South LA have the most ground to gain. As of August 31, hard-to-count census tracts have a response rate of 56.3%, lower than the county’s self-response rate of 62.4%. “It is important to acknowledge that at the root of what makes a community harder to count are systemic inequities and racism that also distribute the effects of COVID-19 unequally,” says Laura Daly, Research & Data Analyst of Advancement Project California. “By securing an accurate count we are planting the seeds for sustainable change in the form of investment and resources to deliver a brighter future for millions of Angelenos, particularly for historically undercounted communities of color.”

ACTIVATING A POWERFUL NETWORK OF ORGANIZERS IN THE AGE OF COVID-19
The California Community Foundation (CCF) united over 115 community-based organizations to undertake a landmark We Count LA campaign—one of the most robust efforts in the entire country. The coalition represents 16 diverse populations and 60 languages and serve as trusted community ambassadors to help combat mistrust and fear by reinforcing the reasons why being counted is critical during this pandemic.

Even as the pandemic forced all in-person census outreach tactics to a complete halt, We Count LA organizations pivoted the entire campaign to a digital and virtual environment. They have used every tool from phone and text banking, email campaigns, social media and paid digital advertising to collaborations with ethnic media partners. Through these tactics, We Count LA has been able to reach hundreds of thousands of hard-to-count Angelenos on the census despite widespread shelter-in-place orders. Examples of creative approaches are the Census Caravans and the Week of Action activities, click here to see more. Efforts like these are helping us get closer to a complete count.

REGIONAL LEADERS MOBILIZE FOR AN ACCURATE COUNT
At the center of this massive organizing effort are eight We Count LA regional hubs that serve as coordinating bridges to over 250 organizations and stakeholders that come together to work in unison. The following organizations are rallying LA County We Count LA grantee partners in getting out the count:

Amid a political firestorm, global pandemic, economic turmoil and now a shortened deadline, these leaders continue to organize their designated region’s final push to ensure our people are heard.

WE CAN ALL PLAY A ROLE: TAKE THE CENSUS TODAY
Getting an accurate count will benefit all Californians. In 2010, Los Angeles County had a significant undercount, which resulted in the region losing hundreds of millions of federal dollars that could have strengthened our health care, education and housing systems. We cannot afford to have an undercount again. Everyone can complete the 2020 Census online or by phone. Taking just a few minutes to answer the nine simple, confidential questions helps determine dollars that fund important programs for the next 10 years. Talk with family, friends and neighbors about the importance of the Census. Use social media to reshare and amplify census messaging. Support organizations who are doing this tireless work on the ground. Act today. Together, we can count LA.

Appointed by the State of California as the region’s Administrative Community Based Organization (ACBO), CCF is responsible for leading and coordinating efforts to get an accurate census count in Los Angeles County.