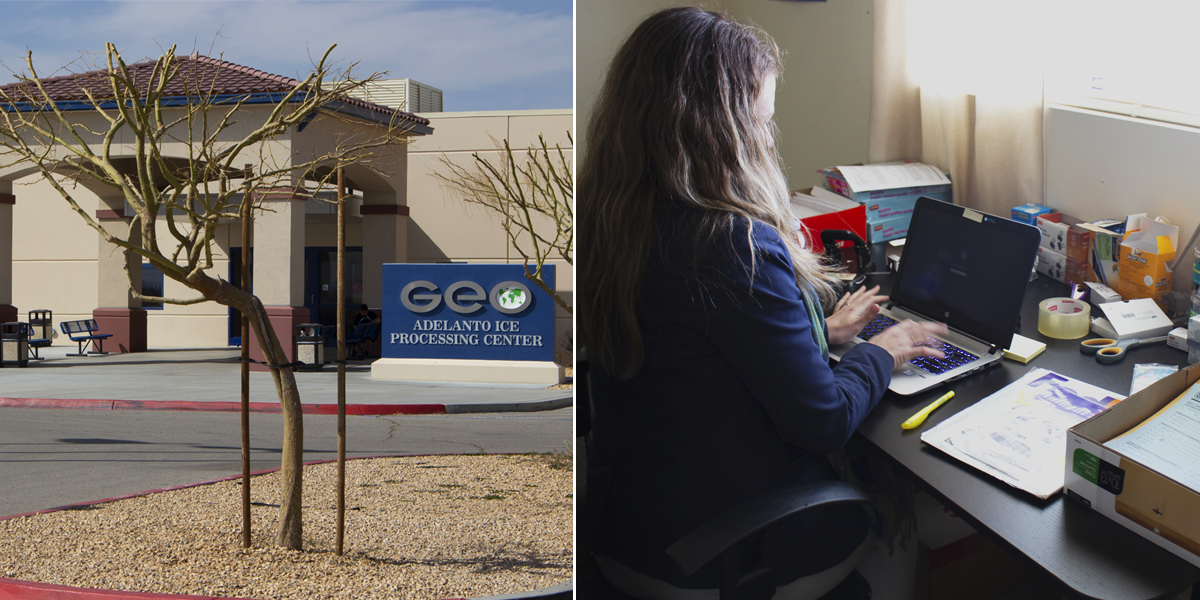 It’s 6:00 am on a Tuesday in Los Angeles. Amanda Schuft hastily jumps in her car and begins the nearly two-hour trek to Adelanto, a city about 85 miles northeast of L.A. She has an 8:00 am hearing to make at the Adelanto Immigration Court inside the Adelanto ICE Processing Center in San Bernardino County.

Amanda is a managing attorney at Immigrant Defenders Law Center (ImmDef), an organization that has partnered with the L.A. Justice Fund (LAJF) to help our immigrant communities access legal representation. ImmDef is one of five LAJF partner organizations that are dedicated to representing individuals detained at the Adelanto facility, which is the largest detention center in California with room to house almost 2,000 detained individuals.

The Adelanto Immigration Court is about 85 miles east of Los Angeles.

Because the need for lawyers who are trained in removal defense is at an all-time high—  in California alone there are over 146,670 pending immigration court cases— attorneys are taking on more clients than ever before. For legal aid attorneys like Amanda, this can mean making the trip out to Adelanto as often as three times a week. “It’s in the middle of nowhere,” Amanda emphasized. “The access to attorneys in general is limited, and the access to pro bono attorneys is extremely limited,” she continued.

To make legal representation more accessible for vulnerable individuals, ImmDef established a working space eight minutes down the road from the facility where attorneys can work on cases during down time and coordinate with other staff back in L.A. The space serves as a hub for LAJF partner organizations who keep it fully stocked with food, water, a printer and any type of office supply an attorney may need to prepare a court filing.

“With pressure being placed on immigration judges to process and deport individuals as quickly as possible, judges are setting tight deadlines with quick turn-around. For our clients’ families, this means scrambling to get us the evidence we need to help get their loved one released from detention. Before the Adelanto Workspace, it was nearly impossible for a family member to get the evidence to us while we were in Adelanto,” Amanda said. 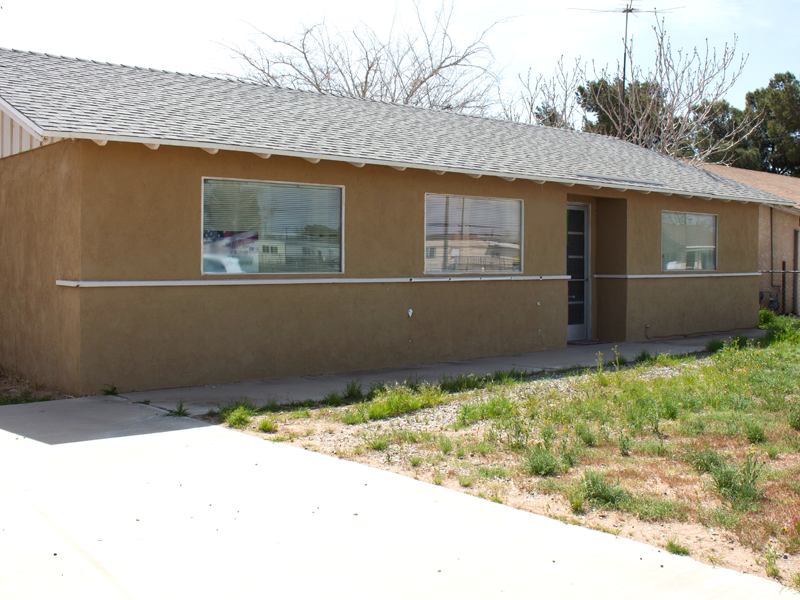 The workspace established by Immigrant Defenders (ImmDef) near Adelanto to serve as a hub for LAJF partner organizations.

She continued, “Now, families can send the evidence directly to our workspace which is minutes away from the Court. We are able prepare and timely present the evidence to the Court. The Adelanto Workspace has therefore made a huge difference in our ability to effectively advocate for our clients.”

Getting to Adelanto, is only half the battle. Once inside the detention center, Amanda waits an hour and half before she is called into court. Her hearing ends around 10:00 am but before she can fit in another client visit, the entire facility shuts down for a regularly scheduled “count” of every detainee. A “count” can  last an hour and a half, sometimes longer. “Sometimes when I have a day like today, I just try to remind myself how much worse it would be if we weren’t out here,” she says underscoring the value of having access to legal representation, especially for detainees at Adelanto.

The detention facility has faced heightened scrutiny after reports of poor conditions. A recent state audit named the city of Adelanto as one of three California municipalities that have failed to address “serious issues that represent significant threats to the health, safety and rights of detainees.” Vera Institute of Justice estimates that right now, over 58% of pending cases at Adelanto lack representation.

“Before this program, we weren’t able to take very many pro bono cases from Adelanto because of the time and resources it would take, “Amanda explains. Studies show that with legal counsel, immigrants are five times more likely to be released from detention than those without. For vulnerable individuals, who oftentimes have a limited understanding of the American legal system and speak English as a second language, access to legal representation can be a lifeboat preserving the futures they’ve built here.

“We’re going into the detention center with limited amount of time and saying to clients ‘I need you to tell me about the worst thing that’s ever happened to you in great detail.’ It’s so important to develop trust so that they believe you have the capacity to provide them with high quality representation,” Amanda voices as she shuts her laptop and packs up for the evening, preparing for another day of providing legal services to some of our most vulnerable community members.

To learn more about the L.A. Justice Fund’s impact and how you can join us in standing up for the humanity, diversity and opportunity that defines us as Angelenos visit calfund.org/LAJusticeFund.

On March 27th, 2019, Adelanto city officials announced that the city would terminate it’s contract with the operator of the Adelanto ICE Processing Center in 90 days. It’s unclear what will happen to detainees who are currently housed inside the facility.