English-language learners are a rapidly growing student population in our state. In fact, they now make up nearly 25% of California’s public school population with more than 1.3 million enrolled in the 2016-17 school year. Their potential is substantial— studies point to bilingual students as having strong attention skills and better understanding of language structure, putting them in high demand in today’s workforce. But they are still behind their peers in overall academic achievement, because most English learner students do not have access to the supports and tools necessary to succeed in the traditional school setting. That’s 1.3 million students whose potential is conceivably being lost.

“Like every student, they deserve to be served properly. They’re a part of who we are as a school system,” explained Dr. Feliza Ortiz-Licon, senior director of K-16 Education Programs at Unidos US. She is also a member of the California State Board of Education and serves on the advisory committee for the newly established Consortium for English Learner Success.

Bringing together educational equity advocates, practitioners, policymakers and researchers, the Consortium is embarking on a promising new chapter of strengthening policies and practices to ultimately expand opportunities for English learner students. 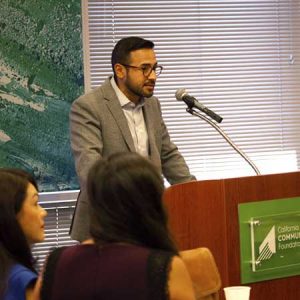 CCF has partnered with six influential organizations –Asian Americans Advancing Justice, Californians Together, the Education Trust West, Alliance for a Better Community, Unidos US and LMU’s Center for Equity for English learners– to close the achievement gap both for students here in Los Angeles, and across California.

“We’re looking forward to reshaping the narrative around English learner students, and highlighting their many assets as students, members of the community and eventually members of our workforce,” said John Garcia, CCF’s Education program officer. “Our hope is to establish English learners as a central component of the educational equity conversation. By informing policy, practice and research, we hope to create alignment among the public, private and philanthropic sectors.“ 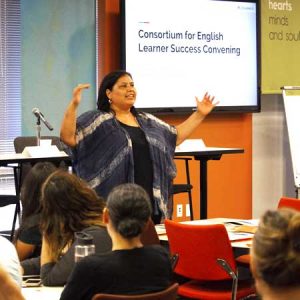 The Consortium held it’s first in a series of convenings this summer to discuss the current state of English learner policies. Monica Garcia, the Los Angeles Unified School District Board’s President opened up the discussion by saying “know that you are directing the conversation,”— an important reminder that this work is set to inform not only philanthropy’s role in promoting the success of English learners, but also Los Angeles’ role as a leader in this space.

Many members of the Consortium operate from a place of experience, relating directly to the English learner students they serve. “The students who are often overlooked inspire me. That was me, we were those students that didn’t have a voice. If not us, then who?” Dr. Ortiz-Licon asks.

Together, the Consortium, hopes to chart a promising new pathway for English learners, and in turn, build brighter futures for a diverse student population with much to offer.

To learn more about how you can support CCF’s work to improve educational outcomes for English-language learners and other vulnerable student populations please click here.