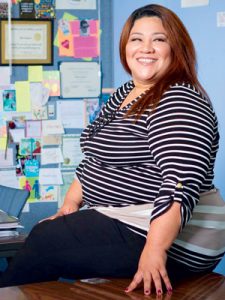 “I love the freedom that we find in America; being able to create your own life and your own path,” said Sandra Aguillón. When Sandra was a child, her family emigrated from Mexico to Southeast Los Angeles in search of a better life. After earning her college degree, she followed in the footsteps of her three siblings and found her calling as an educator. Today, she teaches high school and is an author whose writing focuses on self-motivation.

Sandra wanted to become a U.S. citizen, just like her siblings. But the process was too daunting, time-consuming and costly to complete. This year, however, her determination to become a citizen was fueled by the desire to vote and have a voice in her community. She attended a naturalization clinic through Council of Mexican Federations (COFEM) and never looked back.

“They take your pictures, help you fill out forms and tell you exactly what you need,” said Sandra. “Instead of a weeks-long process, being able to do it all in one place in a matter of hours made a huge difference.” COFEM’s work is part of ¡Protégete!…¡Ciudadanía Ya! / Endless Possibilities, an unprecedented, multi-sector campaign to educate, motivate and assist Los Angeles County’s more than 755,000 eligible legal permanent residents in applying for U.S. citizenship.

Launched in 2015 with funding from the California Community Foundation and the Juntos Podemos Foundation, this campaign has brought together a coalition of prominent immigrant rights organizations, elected officials and Asian- and Spanish-language media companies. Campaign partners inform eligible populations about the citizenship process and provide free workshops to expand access to trustworthy naturalization services. The participation of so many media outlets – once competitors, now collaborating for a common cause – is a first in the country, as it leverages their ability as trusted messengers to connect with L.A. County residents.

CCF and Juntos Podemos have invested $1.85 million in this campaign because we know that integrating immigrants into our communities improves all of our lives. Citizenship allows our fellow Angelenos to fully contribute to their communities. It gives our neighbors the tools they need to transform their own lives, from the right to vote to broader employment options, higher incomes and better lending opportunities.

“When we started this partnership with other nonprofits and media, our opportunities multiplied several times over. Now we’re able to reach literally millions of people, in their own languages.” – Stewart Kwoh, executive director, Asian Americans Advancing Justice-Los Angeles.

“Becoming a U.S. citizen has changed the lives of so many immigrants in our community,” said Anabella Bastida, executive director of COFEM. “They can obtain better jobs but also have a sense of belonging and protection for their own families. They can become full participants in the social, political and economic life of the United States.” And demand has been overwhelming.

The campaign has conducted 200 application workshops, helped with 2,000 completed applications and reached upwards of 4 million viewers, listeners and readers across Los Angeles County. Thousands attended a “Mega Citizenship Workshop” in Long Beach, where hundreds of volunteers helped more than 800 people complete and mail their applications.

“At Asian Americans Advancing Justice-Los Angeles, we’ve had a citizenship program for over 25 years. We’ve seen in community after community that when immigrants get ahead, they’re paying more taxes, there’s more economic vitality and everybody benefits from that reality,” said Stewart.

Just ask Sandra Aguillón. Sworn in as a U.S. citizen this year, she is excited not just to vote, but to embrace all the responsibilities of citizenship. “Now I’m eligible for jury duty,” she said, “and I’m actually looking forward to that, too.”

The California Community Foundation is able to invest in citizenship programs thanks to the Future of L.A. Fund. Built by generations of visionary donors who understand that community needs change over time, the Future of L.A. Fund allows donors to make an impact on L.A.’s most pressing issues for generations to come, whatever they may be. Learn more about CCF’s work at calfund.org/annualreport.