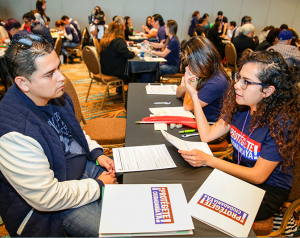 “For 16 years, members of my family tried to become U.S. citizens. We spent thousands of dollars on fraudulent attorneys, we lived under fear and intimidation and we had no idea how to navigate the process. I finally became a citizen at 21 years old. I became mayor at age 36. My goal is to give everyone the same shot I have had; the same opportunity to contribute to this community and to this country. I love this country. When you become a citizen, you are transformed. You belong.” – Long Beach Mayor Robert Garcia

At its best, philanthropy finds ways to reduce suffering by helping the human spirit, the human potential, express itself. It helps people in need overcome obstacles to have the sufficiency of opportunity. And if philanthropy can do that efficiently and without arrogantly interfering with that spirit and potential – well, isn’t that our goal?

Civic engagement is one of those topics upon which nearly all foundations agree. We need more of it. Strengthening the values of personal and community responsibility. The allegiance to this country and its ideals. We need more engaged American citizens.

It’s not well known that 1 out of 40 residents of the United States, about 8.8 million people, are Lawful Permanent Residents (LPRs) but are not citizens. These are people who have come here from all over the world, have been granted legal permanent residence, sometimes referred to as “green card holders,” and are eligible to apply for U.S. citizenship.

To become a citizen, they must navigate a complex set of steps that frankly most current U.S. citizens could not endure. Have you seen the 20-page application? The questions?

Imagine you are an immigrant, a legal permanent resident, who has a minimum-wage job and dreams of becoming a citizen. Completing the application is a legal process filled with acronyms and questions that require precision. Every page has a place where you have to interpret an answer that could jeopardize your application.

Consider these questions and your potential answers:

How did you do?

Applying to be a citizen is very challenging – perhaps as it should be. But surveys of LPRs reveal many myths and fears. It is no wonder many have waited decades.

With more than 755,000 LPRs in L.A. County alone, our foundation has been focused on helping them become citizens by partnering with other foundations; local, state and federal agencies; ethnic media outlets; and notable immigrants’ rights organizations.

On April 10, 2016, the partners in this citizenship push in Los Angeles convened an unprecedented multi-sector collaboration that assisted 1,000 L.A. residents in applying for U.S. citizenship with the help of nearly as many of their neighbors. More than 3,500 people attended this mega workshop to learn about the steps to become a U.S. citizen. Demand was overwhelming.

What made this event unique was it was like a “genius bar” – a one-stop shop for citizenship. You make an appointment; you bring your paperwork and 850 volunteers, 20 nonprofits, the Los Angeles County Department of Social Services and Registrar-Recorder, 129 pro-bono attorneys and BIA-accredited representatives, the US Department of Citizenship and Immigration Services and many others were ready and eager to help. A process that would have taken weeks and months to complete was wrapped up in hours.

There was hope and inspiration in the air. The human spirit thrives when deferred dreams can be realized. It was one of the most nationalistic, most American events I have ever attended.

Partners in this effort are more optimistic than ever that our goal of facilitating the applications of up to 100,000 LPRs this year is possible.

What if philanthropic organizations across the country got together to develop a “genius bar” for U.S. citizenship in their communities? Philanthropy is also at its best when it is a catalyst for collaboration. Many public libraries have already set up something similar through citizenship corners. But how many residents are aware of the services? This is where partnerships with trusted ethnic media sources can play a vital role in spreading the word. What about in-language services? Build on the network of nonprofit organizations already doing this work and help them grow their efforts. Work with government agencies that have resources and services that need more visibility. Engage the business community for volunteers and pro bono services.

I was emotionally moved by the embodiment of the American Dream in the story and journey of the immigrant when I heard Long Beach Mayor Robert Garcia welcome us to this enormous citizenship event. We were all reminded of how our families got to this country. How much is patriotism, civic engagement and belonging worth? There are few investments that have a higher return for all of us.

How many potential mayors are among your LPR population?

John E. Kobara is the EVP and COO of the California Community Foundation. Follow him on twitter at twitter.com/jekobara.