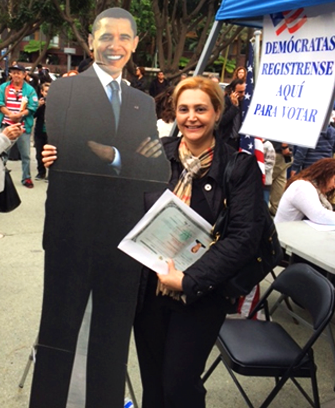 Neda Behmanesh received her citizenship in December 2014, after four years of delays.

Neda Behmanesh lived peacefully in Los Angeles for 21 years before applying for U.S. citizenship in 2010. She married a U.S. citizen, had a U.S. citizen child and for all intents and purposes was an American. Even though she satisfied all the criteria for naturalization, immigration officials denied her application under a covert program that has barred thousands of Arab, Middle Eastern, North African and South Asian (AMEMSA) U.S. residents from upgrading their immigration status or becoming U.S. citizens, ostensibly for “national security” reasons.

Each year, immigration officials with the U.S. Citizenship and Immigration Service (USCIS) secretly subject applicants like Neda to a policy known as the Controlled Application Review and Resolution Program (CARRP). The program violates immigration law, and is unconstitutional because it was adopted without any congressional approval and violates the Immigration and Nationality Act and the Fifth Amendment’s guarantee of due process.

While the program is designed to ensure that immigration benefits are denied to individuals who pose a threat to national security, it relies on deeply flawed criteria to identify national security concerns.

Individuals from AMEMSA countries are disproportionally affected because the flawed program directs immigration agents to rely on inherently discriminatory criteria to identify someone as a national security risk. Travel or prior residence in an area of “known terrorist activity” can flag someone as a security risk. This means that trips to the Middle East to visit relatives or merely being born in certain countries can prevent someone from becoming a citizen. Questioning by USCIS about lawful Islamic religious activities is not uncommon. And USCIS routinely denies citizenship to individuals for failure to disclose “associations” with mosques or donations to Muslim charities.

CARRP also applies to everyone on the notoriously error-ridden Terrorist Watch List. And it flags anyone whose name appears in an FBI file relating to certain types of national security investigations.

As a result, individuals like Neda who have called the United States home for years, lack any criminal history and pose no security threat whatsoever are subjected to CARRP. Worse, USCIS has worked to keep the program a secret, preventing applicants and their lawyers from learning the reason for the delay or denial of the application and addressing any alleged national security concerns.

To Neda, becoming a citizen symbolized the belonging and loyalty she feels towards the United States. It also meant peace of mind in knowing that she belonged to the same country as her U.S.-born son, who recently graduated from UCLA. And it gave her the opportunity to participate in American democracy and give back to a country that she feels has given her and her son so much.

Neda was able to overcome the discriminatory barrier imposed by CARRP only after the ACLU of Southern California intervened and filed suit on her behalf. Shortly after filing suit, USCIS changed course and granted her application. Four years after first applying for citizenship, Neda became a citizen in December 2014.

Thousands more like Neda deserve to be recognized as the American citizens they already feel they are. It is time to change USCIS’ discriminatory practices and end its unlawful CARRP program.

Katie Traverso is a law fellow at the ACLU of Southern California.