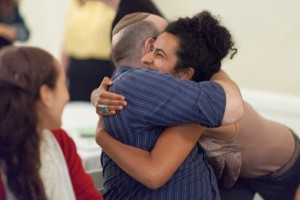 The One Los Angeles, One Nation Initiative supports increased civic engagement of the American Muslim, and those perceived as Muslim, communities in Los Angeles County.

The Initiative seeks to address misperceptions of the American Muslim community post-9/11 by supporting civic engagement through leadership development, engaging residents in public policy and advocacy, and partnerships and collaborations. The Initiative also supports capacity building of Los Angeles based organizations serving the American Muslim communities like NewGround.

Housed at the City of Los Angeles Human Relations Commission, the mission of NewGround:  A Muslim-Jewish Partnership for Change is to equip Muslims and Jews with the skills, resources and relationships to normalize relations and strengthen cooperation on issues of shared concern.

NewGround’s fellowship program works to build the leadership skills of young Jewish and Muslim emerging leaders, bridge any differences and then spread the fruits of their relationship to the wider community. Upon completion of the program, NewGround alumni implement projects designed to respond to pressing issues and to strengthen the civic fabric of the local community.

NewGround alumni have created The MAJOR Fund (Muslim And Jewish Organized Relief), as a joint effort by the Muslim and Jewish communities to globally assist people in need, regardless of their faith, in the critical areas of clean water, education, and healthcare.  The MAJOR Fund is housed at the California Community Foundation as a donor advised fund.

NewGround  Executive Director Rabbi Sarah Bassin and Director of Programs Aziza Hasan both work tirelessly and have collaborated with 35 Muslim and Jewish organizations to reach over 7,000 people with their programs since they began in 2007.