This blog originally appeared on the Black Gives Back Blog. Click here to view the original post. 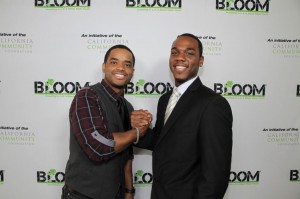 Ninety-Three Percent of BLOOM Youth Have Not Violated Their Probation

On June 26, 2013, the California Community Foundation (CCF) celebrated the one-year anniversary of its Building a Lifetime of Options and Opportunities for Men (BLOOM) initiative with a town hall meeting at Los Angeles Trade Tech College.

“My father was willing to pull me out of a movie if I didn’t get good grades,” said Tate, highlighting how imperative it is for parents to be involved in the lives of their children and being supportive of their education.  Brett Roberts, a young Black man from South Los Angeles, also shared how he went from being arrested at the age of 15 to completing a master’s degree at Pepperdine University and receiving a fellowship to the Harvard Kennedy School.

Parents and the community are urged to direct black male youth they know between the ages of 14-18, who have been involved with the Los Angeles County probation system to BLOOM.   To see how BLOOM can make a difference in your youth’s life, visit www.IamBLOOM.com.