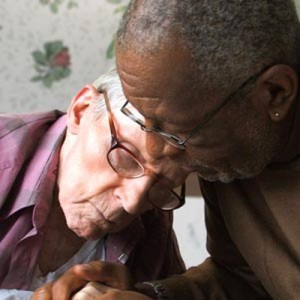 By Ara Babaian, Esq., Chairman of the Board and Eric Harrison, Executive Director, GLEH

Most people may not realize that lesbian, gay, bisexual and transgender (LGBT) seniors and seniors living with HIV/AIDS face a disproportionate amount of challenges as compared to their heterosexual counterparts.  Many of today’s LGBT seniors, in particular those who are low-income, spent their adult lives in fear of discrimination, most did not have children, and many were cast aside by their families of origin.  They are basically alone.  While the younger LGBT generation is experiencing greater social awareness and acceptance, there is tremendous ageism in the LGBT community which further disconnects LGBT seniors from their community.

Another challenge is poverty.  We don’t think about the impact that not having a legal married status has on seniors, but it is devastating.  LGBT seniors are not entitled to survivor benefits that married seniors may access at the passing of a spouse.  This immediately puts an LGBT senior at risk of homelessness when his or her partner passes on.

Gay and Lesbian Elder Housing’s (GLEH) Triangle Square complex, with its 112 apartments, stands in the heart of Hollywood.  Triangle Square is the nation’s first and still only affordable low-income housing development with a focus on LGBT elders 62 and over.  It serves as the flagship for GLEH’s future developments, as well as a model for the standard of care that can be provided nationally.

The modern and warm architecture of Triangle Square blends in with the dynamic neighborhood.  In contrast, many of the tenants of Triangle Square often have felt cast aside, been discriminated against, and in some cases, even been abused.  The vast majority of the tenants are LGBT seniors and seniors with HIV/AIDS.  Several of our residents in fact were homeless, spending months “couch surfing” in order to stay just one step away from skid row.

Alice, a Triangle Square resident since 2007, is a native of the Bronx (1935) and worked as a school teacher until she moved to Los Angeles and became a social worker in 1964.  She and her partner Sylvia were together for 45 years.  Sylvia passed away in March 2009, which left Alice and her two cats to survive on a limited Social Security income of just over $1,000 a month.  Alice arrived at Triangle Square after seeking out all the resources she could think of, pleading for help to find a place to live…”I was desperate….Triangle Square gave me a place to live, and a place to grieve and a place to find me…if I had been thrown out into the world, I don’t know what I would have done…this is a sheltering and nurturing place where people care about my feelings and where people understand, without GLEH and Triangle Square, I don’t know that I would be alive today.”

In serving seniors, GLEH is committed to providing a safe, warm and nurturing environment in which LGBT elders can “age in place,” retain housing and promote health and wellness.  To that end, we established the Comprehensive Housing 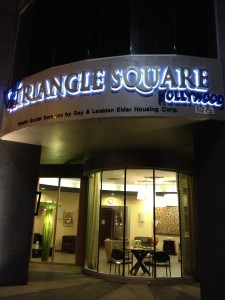 Care Project (CHCP), which is an innovative service-delivery model that removes the barriers to healthy aging and independent living by providing access to health and supportive services.  Thanks to our many community partnerships, we are able to serve nutritious meals, offer a variety of classes, connect our residents to vital social services, and create a continuum of care at little or no cost to our residents.

The need to address low-income senior housing is reaching a critical point with the “gray tsunami” building slowly but steadily as the baby boomer generation ages.  More acute are the needs of the LGBT elder community.  There are an estimated 75,000 LGBT seniors in Los Angeles County, and that number is expected to double by 2030 as the general population ages.  We currently have between 300-400 seniors on the waiting list in order to be able to call Triangle Square home.

Our sights are set on the future, including possibly opening locations in Houston, Fort Lauderdale and New York City where real estate is at a premium.  We also are acting in an advisory role to other organizations looking to replicate this much-needed model.  Our second location, The Argyle, is currently under construction and is slated for completion in spring 2014.  We look forward to a day when the waiting list is no more and when low-income LGBT seniors and seniors with HIV/AIDS can age comfortably and safely, in place.