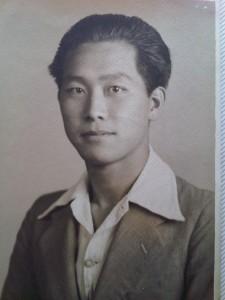 Growing up in San Francisco to Korean parents, I looked different than my classmates but in my home and heart, my family was unabashedly American. My father, now 95, has been an American citizen for almost 75 years and served in the American army. His love for America (which he calls home) is as large as his personal dream: That one day North and South Korea might reunify.

My father, Hak Won Sunoo, or Harold as he is known to non-Koreans, came to the United States in the 1930’s when Korea was a colony of Japan. His mother, sensing his strong Korean nationalism would lead to his imprisonment, had a missionary assist in getting him passage to the US. He was 20 years old. Dad was already a political activist in high-school; he was organizing for a Korean democracy. When the Korean War left the nation divided, my dad’s mission of reunification emerged, even though he was now living half a world away.

He married my mom, the daughter of Korean immigrants. As the story goes, my mom was looking to marry a Korean scholar with big ideas, and she did just that. Dad became a Political Science professor at a liberal arts college. For the past 35 years, my dad, with the support of my mom until her passing, set up international seminars between North Korean, South Korean and American scholars in Japan and Germany (both recognize North and South Korea) to discuss a path to reunification. While these meetings were modest in size (50-100 people), my dad was idealistic enough to think that whatever sparks were being created might start a fire. Once the travel became more challenging and my mom’s passing meant that he would be alone in managing these seminars, he turned his attention to other ways of achieving his goal.

My dad realized that he could ‘put his money to work’ for the cause. He carefully researched foundations and decided that 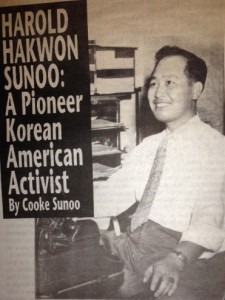 he would put 1/3 of his life’s savings into a fund at California Community Foundation. Dad’s ‘Peace in Korea’ fund is designed to last well beyond his lifetime and is his living legacy. The fund is to support organizations that share his agenda, or at least his deep affection for Korea. One of his most remarkable contributions was to the progressive Korean Immigrant Worker Alliance (KIWA) that needed a grant to begin building a housing project and community center in L.A.’s Koreatown.

I don’t necessarily share all of my father’s beliefs but working with him and his fund has made me much more aware of what his dreams have been. As I take the lead in recommending grants, it is drawing our family closer. Thanks to the work that the Peace in Korea Foundation is doing in the community, my children understand what granddad is all about. A beautiful product of working together as a family is the fact that we have this shared legacy and feel compelled to do our best to see it through.

Dad is still very active in the community. He speaks about six times per year at senior centers and shares his dream of Peace in Korea with other seniors. He recently celebrated the groundbreaking of the Handol Affordable Housing Project, the project that his fund helped to get off the ground only a few years ago. As peace in Korea seems more elusive than ever, I think that through his fund, Dad has found another route to creating meaningful change, right here in Los Angeles, one grant at a time.