At the Intersection of a Social Mission and a For Profit Model: A Social Enterprise Called Isidore Electronics Recycling 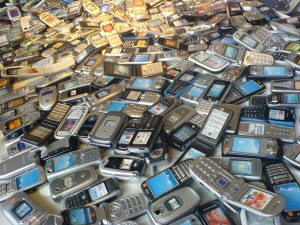 How many cell phones do you think you have owned? 5? 12? If we take the adult population of California (roughly 28 million) and apply the statistics that 87% own a cell phone (as per the Pew Research Center) and that the average person replaces their phone every 18 months (US EPA) – that would mean that there are currently 25 million cell phones in use here in California… and that number is constantly turning over. Here is where things get ugly: of those 25 million phones, only 20 percent will get recycled. That means that, each year, there are 20 million phones thrown in the trash or that sit gathering dust in ‘junk’ drawers around the state. And don’t even get me started on other electronics such as computers, laptops, digital cameras and tablets, all of which are subject to shorter and shorter useful lives and, if not handled correctly, long stays in landfills right here in our back yard – out of sight out of mind.

Our ‘out of sight, out of mind’ mentality isn’t limited to our gadgets. As a society we have applied the same logic to our incarcerated population. This year in California, the inmate population is over 130,000, with a third hailing from L.A. County. Upon release, around 70% of them will return to prison within three years for a variety of reasons, but let’s be clear: enjoying their time on the inside isn’t one of them. Aside from a few charitable organizations that offer support for the transition from inmate to member of society, many assistance programs such as CalWorks are not available to felons with drug charges on their files, and few companies will hire anyone with a record. Prisons have become the equivalent of the ‘human’ junk drawer. We warehouse poor, mentally unstable and drug addicted folks by the thousands (who, yes, committed crimes), make very little effort to rehabilitate them, and, in the end, it takes a Federal Court Order to get us to try and clear that drawer out.

The main tragedy of the junk drawer, whether it is filled with electronics or people, is the missed opportunity to reclaim the value that is inside. In 2011, my co-founder Aaron Malloy and I started a company called Isidore Electronics Recycling to try and recover some of that lost value. We do three things:

Currently we are a small but mighty team recycling tons of electronics in a facility east of Downtown L.A. Two thirds of our employees have records, and we hope to employ hundreds more. We have big ambitions; the more electronics that we keep out of our landfills, the more people we can employ, the more paychecks that can be brought home, and, if we succeed, the fewer people who will return to jail or prison. We might not solve the prison crisis in California by ourselves, but we will make a real tangible difference.

Isidore is a new, Los Angeles social enterprise. We believe that the private sector has a responsibility to help address the problems that plague our City of Angels – and we need your help. Here’s three things you can do:

1)      If you have old electronics, and you want to do something positive with them, recycle with Isidore.

Thanks, and Happy Recycling,