Like Everything About LA, Being Education Mayor Is Different 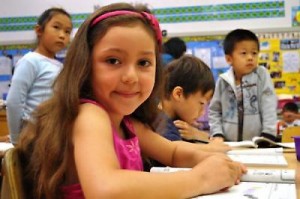 It’s been almost eight years since Antonio Villaraigosa moved into LA City Hall and announced fixing the public schools would be a hallmark of his administration — even though he had no formal control over the school district. Cynics scoffed and advisors cautioned, but the new mayor was on a mission and the behemoth Los Angeles Unified School District, or LAUSD, would never be the same.

So what, if anything, has changed? LAUSD has had double-digit growth in academic performance, based on state test scores for each of the last five years and a graduation rate that’s up from 48 percent five years ago to 64% today.

Almost 140 schools have undergone aggressive turnaround efforts over the last five years, and the percentage of LAUSD schools meeting the state goal of an 800 API score (Academic Performance Index) has more than doubled. Attendance is up and suspensions are down dramatically over the same period of time.

When Superintendent Cortines retired, the board appointed the equally reform minded John Deasy to replace him with the aim of carrying the agenda forward.

Los Angeles has more students enrolled in charter schools than any other school district in the nation, 82,788 students in the 2011-12 school year, or 12.5 percent of the total K-12 enrollment.

The Mayor’s Partnership for Los Angeles Schools added six more schools and last year its network of schools posted gains in their API scores that outpaced the district and state overall. The Partnership’s Jordan High School had the highest API jump of any high school in the District.

Moreover, the Partnership broke barriers when it tested all its second graders for entrance into the gifted program and proved there are as many gifted children in inner city schools as there are in more affluent areas, correcting an egregious, historical oversight. As a result, LAUSD began testing all second graders for entrance into gifted programs.

The Partnership and the mayor also took the lead in a landmark lawsuit alleging the civil rights of students had been violated due to the disproportionate burden seniority-based hiring and layoff practices place on inner city schools during budget cuts. When budget cuts hit, as they have in each of the last five years in LA, the last hired are the first fired, which meant inner city schools could see staff cuts of 50% while other schools could see none. This lawsuit has changed that.

The Mayor’s Partnership schools also trail-blazed areas of parent engagement. Parent centers at each school were redesigned, parent teams were recruited and trained at each school, and a groundbreaking Parent College was launched, eventually hosting thousands from across LAUSD.

Moreover, the Mayor’s Partnership did something LA’s public schools had never done successfully: it raised money. It attracted partners. It became an effective way to engage philanthropic and city leaders in local public schools. To date, the Partnership has raised more than $72 million and partnered with more than 70 organizations to bring services and materials to their students.

That increased engagement in public schools is perhaps one of the key legacies of this Mayor. Since he couldn’t push the school district levers of power himself, he necessarily relied on his skills to get others to share his vision and make it real. The result is an organically growing reform movement that will live well beyond the end of his term.

Mayor Villaraigosa will leave office next June, but the Partnership for Los Angeles Schools will stay in place, a team of 40 professionals working with their portfolio of LAUSD schools. School Board members and the Superintendent will continue on as well. The roster of funders and partners for public education in Los Angeles will continue to increase, as will the variety of educational options for parents, students and educators. Charters will continue to prosper and contribute to the reform of public schools. Test scores will continue their upward climb.

Despite enormous progress and momentum, the problems in LA’s public schools are by no means solved. Reading and math scores still lag national averages badly; continuing budget cuts will further decimate public funding for schools; the district and its unions cannot agree on methods of teacher evaluation, costing them possibly $40 million in federal funding; reformers and unions are battling over how to handle teachers accused of serious crimes; hundreds of thousands of English Language Learners have to be more effectively managed and taught; programs for art, music and PE receive little to no funding–the list goes on.

As President Eisenhower said, “Leadership is the art of getting someone else to do something you want done because he wants to do it.” Antonio Villaraigosa used that piece of wisdom to make himself LA’s version of an Education Mayor. Let’s hope LA’s next mayor embraces Eisenhower’s words as well, builds on Mayor Villaraigosa’s education legacy, and sets about making it their own. The 650,000 children of LAUSD and their families are depending on it and deserve no less.