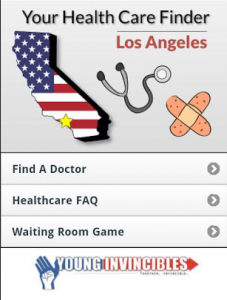 My generation can do everything imaginable on a cell phone. Directions? Check.  Hang out with friends? Check. Set up a reminder to call Mom on Mother’s Day? Check?  Call mom?  Hopefully, if the battery isn’t dead from Angry Birds.

This is the Millennial generation.

Young Invincibles started in DC to make sure that health care reform worked for young people, and after tackling the East Coast, we decided to expand and set up an office right here in LA.  The first major project of the LA office is launching our just-completed mobile app focused on getting young people informed about health insurance and insured.  Interested?  Check it out here on the iTunes store or on Google Play.

Research shows that many young Americans don’t have regular access to a computer.  Instead, approximately 50% of young people own smartphones and this number just keeps growing.  Additionally, Latinos and African Americans own smartphones at a higher rate than the rest of the population, and individuals from lower income communities often rely on those phones as their primary source of internet.  We can’t all go to the Apple Store or Best Buy and drop a ton of money on the newest computer.  But, many of us can go to the Cricket or Metro PCS store you see in every single neighborhood and pick up a smart phone.

In case it isn’t obvious yet, we built this app to meet young people where they are.  It won’t be our only form of outreach and education, because like all people, young adults all learn in different ways.  But the app does give us a chance to connect with them in an easy way that is relevant and that many of them are already using.

Our app isn’t just another tool to self-diagnose symptoms. It capitalizes on this captive audience through an interactive interface with a number of features, including:

The potential for this app to have an impact in California is huge.   There are 9 million Californians aged 18-34, and 2.9 million of them lack insurance.  Many of these young Californians have little to no access to healthcare under current law, but that will all be different with the changes coming from federal health care reform.   Someone has to reach these Young Invincibles and educate them about the new coverage. And we have just the app to do it!

Thanks for reading, Tamika

Tamika Butler is the California Director of Young Invincibles.