A Fundraising Cliff? What does the data say? 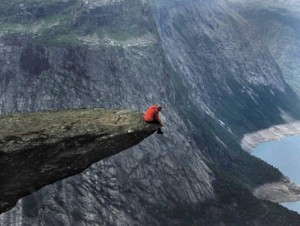 Over the past few months I’ve been asked a lot of questions about giving trends: What explains the flat trend in overall fundraising? Is it the economy? Was it the election cycle? What about Hurricane Sandy? Are we approaching the fundraising cliff? Will it get better? When will it get better? Did the Mayans predict this?

There are opinions and there is data. I prefer to show actual data and suggest what may be or may not be happening in the nonprofit sector.

What Is Not Happening

There is a lot of speculation about what has been causing the challenges that fundraising is facing in the United States. Here are a few of the more common questions:

Are people giving more to the presidential campaigns and less to nonprofits?  No. The Giving USA Foundation, which estimates national charitable giving over a 50-year span, reports that campaign fundraising has historically had no apparent impact on overall individual giving. It’s worth noting that less than 1% of Americans give campaign contributions of more than $200 to political candidates, parties or PACs.

Are people giving less because of possible changes to charitable tax deductions?  No. The exact opposite is more likely especially for wealthier donors. The potential for tax code changes are more likely to encourage these donors to give now instead of waiting. Some have suggested this is one reason why George Lucas recently sold the Star Wars franchise to Disney. It has been reported that Lucas plans to “donate the majority of the proceeds to his philanthropic endeavors.” Also keep in mind that only 30% of American taxpayers itemize their deductions, which often gets overlooked in end-of-year holiday appeals.

Are people giving less because of the economy?  Maybe. The National Bureau of Economic Research said that the recession ended in June 2009, and fundraising historically takes three years recover from a recession. But the Center on Philanthropy at Indiana University says we are experiencing the second slowest recovery since 1971. I believe that uncertainty about the economy is probably a bigger factor here than anything else.

The data shows a troubling trend in the nonprofit sector: Donor populations have been shrinking for the past five years and revenue per donor has been flat. Disaster giving has provided some temporary relief to the situation.

These trends are based on Target Analytics’ evaluation of transactions from 77 organizations, including over 37 million donors and more than 77 million gifts totaling over $2.4 billion in revenue. These nonprofits are primarily focused on direct mail and online giving.

The good news is that in the first half of 2012, new donor numbers are on the rise with almost every sector experiencing some degree of growth. For most sectors this growth appears to indicate a leveling-out and it’s possible that we have reached a bottom.

International Relief organizations had large declines in revenue and donors, but show signs of returning to normal non-disaster giving levels. Hurricane Sandy is unlikely to have a significant impact on this trend.

Overall giving will not begin to increase sustainably until there is consistent new donor growth over several quarters and organizations have begun to rebuild their multi-year donor base.

What Else is Happening

The Blackbaud Index of Charitable Giving has shown an overall negative trend in year-over-year giving since August 2012. Both large and medium sized nonprofits have been in the red, but smaller organizations have remained positive.

The Blackbaud Index is a broad-based fundraising index that reports total giving trends of 2,984 nonprofit organizations representing $7.8 billion in yearly giving on a monthly basis, both offline and online. It has a mix of small, medium, large organizations across multiple sectors with diverse fundraising programs.

Once again we see International Affairs having significantly less revenue on a year-over-year basis and this has an overall drag on The Blackbaud Index. Healthcare organizations have experienced negative growth for over 12 months. Other sectors are showing signs of trending lower heading into peak giving season. About 1/3 of all giving occurs in the final three months of the year.

The Blackbaud Index of Online Giving has remained in positive territory on a year-over-year basis. But keep in mind that online giving represents less than 10% of overall fundraising in the US. Medium and small sized organizations are having positive growth, but large nonprofits are trending negative. Some sectors are having very good growth while others, like International Affairs, continue to struggle.

Where Do We Go From Here

If we’ve reached a bottom, then it’s going to take time to recover. It will not happen overnight and there is going to be some continued pain. But there are steps that nonprofit organizations can take back from the edge of the fundraising cliff.

Anemic acquisition and poor retention have created a perfect storm for fundraising troubles. Without key changes the sector is likely to continue experiencing flat growth and an eroding supporter base. Here are some recommendations to get things moving in the right direction:

Just getting more new donors isn’t enough. That’s been tried and it doesn’t work long term. There must be more focus on using multiple channels, including direct marketing, phone, online, social, and mobile. Acquisition is often an on/off switch. Engagement is a volume knob — not always on “11″ but never on zero.

The dramatic swings in disaster giving clearly have big impact overall fundraising. Good news in the world can mean bad news for giving. The focus must be on sustainability — not the next disaster. Showing outcomes and impact is proven to turn episodic donors into long-term supporters.

Everyone is talking about “big data” but not much is actually being said. We know that the use of analytics in fundraising is not a new concept. The focus now needs to be on the broad use of information and analytics by nonprofits that helps them make smarter decisions. No more guessing.

All Year Over End of Year

Get ready for the 57 blog posts, articles, emails, and webinars about how much giving happens at the end of the year. Add another 23 about all the online giving that happens in the last two weeks. This is “best practice” gone bad at its best. Diversify your fundraising across the entire year.

None of this works if retention rates do not significantly improve. Losing 30% to 40% of donors each year limits fundraising’s ability to grow. “What if it was all about retention?” needs to be the question every board, leadership team, department, task force, and partner asks.

Change is hard. Whether it’s changing the world or making changes in the nonprofit sector. And the best way to start changing things is to change things. That sounds really simple — because it is. Change is what is needed to truly get fundraising growing again.

Take a deep breath. Take a step back. Let’s get moving in the right direction.

Steve MacLaughlin is the Director of the Idea Lab at Blackbaud and spent more than 15 years building successful online initiatives with for-profit and nonprofit organizations across the world.