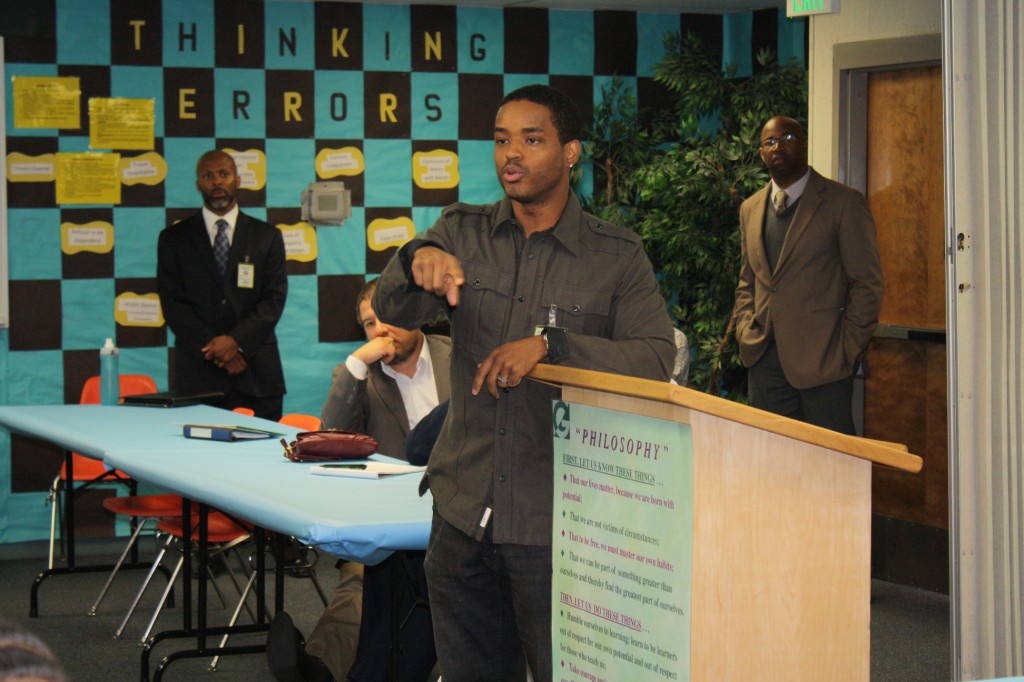 It was a sobering scene at the California Rehabilitation Center (CDC) for Men in Norco, located right outside of Ontario.  What used to be a hotel, then a Naval Base, is now as correctional facility for men destined to be released into a society that has and will reject them time and again. These men are not unlike my own brother who has spent his adulthood in and out of prison.

My visit was part of a tour for business and foundation representatives sponsored by the California Community Foundation (CCF) in Los Angeles as part of an initiative called Building a Lifetime of Options and Opportunities for Men.  BLOOM is designed to redirect Black males ages 14 – 18 who have had a brush with the law onto a path of education and employment opportunities.

Apprehensive at first, I stood surrounded by 50 inmates checking into the prison’s chapel, chain-free and eager to make their case to people who they were informed were “successful” in life.  We were put on a panel that included BLOOM’s spokesperson, actor Larenz Tate, and asked how we were able to become successful.  My answer was simple, “I don’t consider myself successful, I consider myself blessed.”

Coming from a praying family, I don’t give anyone the credit God deserves.  I told them my story – the story of a young girl and her brother who grew up without a father.  The striking contrast of our adulthood signifies a definite need for young boys to have a positive, male role model growing up. As I followed the example set forth by my mother and became a corporate executive, my brother still struggles with day-to-day living and continues to be a product of the streets.

Larenz Tate, poised and serious, asked the inmates if they had seen the film, “Menace II Society” in which he played the hardcore gangster, O’Dogg.  Every hand in the room shot up.  Tate, who took the role when his was 17-years-old, stated he was not unfamiliar with the street life because he took a different path with the protection of his family and close friends who were confident in his success.  He explained that he was able to turn his “gangsta’ role” off as he faced real life, unlike real life gangsters who, as the saying goes, are “in it fo’ life.” Tate vowed his unwavering support in their plight toward rehabilitation and was met with cheers.

Depending on the inmates’ needs, Norco’s CDC provides limited access to drug rehabilitation programs, religious services, and some inmates have the opportunity to receive a GED or Associate in Arts Degree while incarcerated. This sounds great, right?  But what value does all these services have when you’re released into the real world, where there are no second chances for criminals, especially those of color? The overall consensus from the inmates we spoke to at the Norco faculty was that they have doors slammed in their faces once they reveal they are convicted felons, or they are judged at the first sight of their tattoos. Others admitted to not knowing anything else but the streets.

The visit to Norco was organized by Renford Reese, a political science professor at Cal Poly Pomona who wrote the 2006 book, “Prison Race,” in which he examined the so-called “school-to-prison” pipeline.  Reese praised the efforts of the Norco facility to create a college dormitory-like setting where inmates can work toward their associate of arts degree. “The department of corrections is pleased with what Norco is trying to do,” Reese said. “The inmates are exposed to academics. Facilities like this should be geared more toward a reintegration academy that provides professional development, life skills assessment, college applications and job fairs. Too often people are released with no job skills. They return to the same neighborhood, same people and same habits. That is why the Black recidivism rate is so high. Inmates are not used to being self-reliant.”

“Like pigeons who find their way back home, we find our way back to the streets because it’s what is natural to us,” explained an inmate named Trevon.  What he is acknowledging is that although pigeons have connections with the earth’s magnetic field, they often find their way back home based off natural or manmade landmarks such as roads, streets and familiar buildings. What comes natural for inmates seems to be fear of rejection, and the comfort of the familiar routes of survival.

As a community, it is our job to tear down these landmarks that direct our youth to the streets, demolish the manmade roads to failure and give those deserving, another chance. BLOOM seeks to serve 2,000 youth by the year 2017 with at least 60% of them completing high school and half of them becoming employed. The potential for reducing Black male youth’s overall involvement in the Los Angeles County juvenile probation system is promising as well. BLOOM represents a bold move to reintegrate Black male youth into the economic fabric of America. BLOOM needs the help of the community through mentoring, donating and providing internships to our marginalized youth.  Please visit www.calfund.org/BLOOM to see how you can help.

Thank you for reading,

Terri Dixon is an Account Executive with LAGRANT COMMUNICATIONS in Los Angeles.